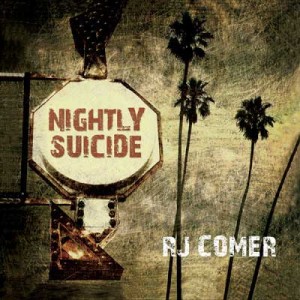 RJ Comer teams up with producer Jef Scott to deliver a truly satisfying 3rd solo album that is sure to win over fans of American alternative blues and country rock. RJ’s work on Nightly Suicide proves that an impactful, significant LP release doesn’t have to be longer than six tracks; what makes this possible is the quality of the production as well as a well-balanced mix of guitar sounds that are critical to the genre. Overdriven leads, pronounced drums, a healthy bassline and somber lyrics combine in a tasteful way that leaves the listener wanting more.

The opening track, “Steppin’ Down”, initially channels Neil Diamond in a way that is completely unique and true to form. Here begins the sonic theme of the album: dirty, well-phrased guitar leads interspersed with moody but punchy drums. There’s a calm sorrow in RJ’s voice and it sort of haunts the listener as tales are told of addiction, loss and surrender. Even though the overall tone of the first few songs is sad and woeful, there is still a sort of hope that shines through, and this is most notable during the guitar solos that surround the bridges of each song.

The second and title track of the album is “Nightly Suicide”. Here RJ communicates through an addiction narrative, and the subject matter is not for the faint of heart. What’s most refreshing about RJ’s contribution here is how raw his approach is; he doesn’t back down from telling an honest story and dealing with some very dark issues. Melodically, the song is a great representation of blues rock and the strong backbeat gives the tune a big, bold sound. The song Nightly Suicide is equal parts catchy and memorable.

Continuing on into the album beyond “Losing What You’re Losing” and “One Day” treats the listener to more of RJ’s upbeat sound. It’s at this point that the slide guitar begins to really have a presence, and the timing is great. If RJ wanted to combine the sounds of the Eagles, Tom Petty and a little Fleetwood Mac, he did it fantastically well. There’s even a little nod to The Police found in the intro on “One Day”, and it’s quite fitting.

The final track, “Ex’s and Oh’s” is a real treat: RJ Comer covers the popular tune from Ellie King in a way that only he can, adding his own element of country-inspired twang and blues instrumentalism. It might seem strange to hear a pop cover done by a blues man, but he pulls it off in style. This capstone track is novel and fun, even if RJ’s tongue is firmly planted in his cheek.

All in all, “Nightly Suicide” doesn’t disappoint when it comes to delivering pleasing, definitive tracks that please the ear and offer a lot of lyrical content to chew on. It may take a few listens to really digest the undertones of both the melodies and the lyrics, but it will pay off. RJ’s music on this album is rich and multi-faceted; it will please his existing fans and new listeners alike.