2-hour program featuring an interview with country artist RJ Comer. He talks about his hometown of Chicago, moving to California as a teen and they taking a fascinating life journey to settle in rural Dickson County, near Nashville. RJ plays three songs live and we hear selections from his new album, One Last Kiss, along with some of his favorite songs by other artists. 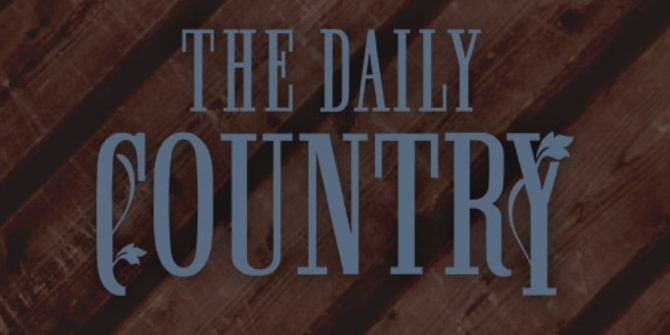 Thirty years ago when RJ Comer dropped out of music school he thought that was the end of his dream – but music wasn’t done with him just yet. Years of violence, poverty, fractured relationships and suicide attempts followed. After a come-to-Jesus experience in a Mississippi jail, he straightened his life out, worked his way through law school to become a lawyer. Along the way, Comer kept coming back to music, playing with a band on the side – one that was eventually signed. He took the opening and stormed back into music. Comer is now releasing his debut solo album (and sixth release overall), One Last Kiss, on June 15.

Offering insights of a man who transcended hardships few people escape, the songs on One Last Kiss straddle the line between traditional and contemporary Americana and blues. Combining his baritone vocal with a ragged edge, One Last Kiss shows the emotional and experiential range of a man who once only knew how to fight or flee — who slowly learned to live and prosper, and eventually learned to love. Ahead of the release, Comer kindly took the time to answer his Essential 8 where he spoke about One Last Kiss, his songwriting process, Denny’s, and more.

When/where do you do your best writing?
I muse best late at night, alone, on a street (or alley) in some big city or on my back porch in the Tennessee woods. It’s kind of a lone wolf thing for me—running through the tangle of stories, phrases, and images in my mind, sniffing them out, nose to the ground until something close to poetry falls into place that inspires me.

Do you write about personal experience, the experience of others, observations, made-up stories, something else or a combination?
Mostly I write from my own experiences or the experiences of people I have known personally. That personal connection feels the most intimate and authentic to me. There are exceptions, though, like my heartbreak song “House Grown Cold.” I’ve been happily married to the same amazing woman for 22 years. So, for that song, I had to imagine what it would feel like if she didn’t love me anymore. I’ll tell ya, that bit of musing scared me a whole lot more than any of the bad stuff that has really happened to me.

Why did you choose to anchor the album with the songs you did?
There are really two anchors in this album, think of them as fore and aft. They are Love and Loss. Songs like Under a Lover’s Moon, Let’s Run, Leave Your Light On, and All Over Again are about my marriage and the adventure my wife and I have been on together for 22 years—the anchor of Love, and it is an anchor rising. Songs like House Grown Cold, Bad Day in Paradise, If I Could Be Water, and One Last Kiss come from the side of me that remembers not always being a good guy, that sometimes still feels undeserving of love or redemption—the anchor of Loss, and it’s sinking. That’s the yin and yang of this record and the yin and yang of me.
What’s your favorite/”go-to” food on the road?
That’s easy, Denny’s, particularly the Super Bird. Now, when I’m driving 500 miles in a day to get from one gig to another, I don’t stop for anything but truck stop food. But after a gig, all alone and once again anonymous in the night, whether it’s the Florida Keys or Rolla, Missouri, I’m gonna slide into a booth at Denny’s and eat me some Super Bird. No, I am not sponsored by Denny’s, but in case they’re reading this…

How do you kill the long hours in the van?
I tour solo, driving myself in my pick-up truck. It’s a little easier to kill time when you’re the one driving. But I pass the time chain smoking cigars and listening to news on satellite radio—sometimes talking back to the radio when I think I have something worthwhile to add… yeah, I’m that guy who talks back to the radio like I’m part of the conversation. And, of course, listening to music. I prefer blues-based rootsy rock & roll when I’m driving.

What’s your favorite venue and why?
My favorite venue is the one I’m playing. Really. I may get frustrated playing a gig where I compete with pool tables, a veritable panoply of TV screens, and the maddening din of the inattentive drowning out my heartfelt confessional ballad. If I let myself, I’ll imagine those better venues I’ve played or become envious of artists that no longer have to play pub gigs to get by. But my higher self remembers that I am living my dream in that moment, in that venue. I get to make music for a living; I’m not working a day job anymore. So my favorite venue is the one I’m playing. And I think the audience deserves that from an artist.

What’s your dream venue and why?
Because I most often play solo acoustic, my dream venue is a listening room with a bar where people can get a drink, and the audience gives the artist their attention. In that setting, I can really let the audience in, be emotionally available to them, and they can let me in. Places like the Palms Playhouse in Winters, California or the newly re-opened Blue Note in Tampa, where we can all be together going through the emotional arc of the show.

Is drinking at gigs a positive or a negative?
Ha! Well it’s definitely a positive if the audience has a few drinks—especially because I usually do two or three drinking songs in a set. It’s definitely a negative for me to drink at gigs… which might explain why I have two or three drinking songs in a set. Practically, however, it really is about the venue, not the availability of alcohol. I’ve played my share of roadhouses and dive bars, and I adjust my set to that crowd. Ideally, the audience drinks responsibly and pays attention – with just enough alcohol to loosen up and be open to going on the musical and emotional journey I offer.

Read Interview at The Daily Country >

RJ and Randy Skaggs talk about the storytelling tradition in Americana music and in RJ’s latest releases.

RJ shares the backstories behind the darkness, addiction, violence, redemption, and humor in his Hell Hole Swamp EP.

L.A. based musician (soon to be Nashville bound) RJ Comer hangs out in the Nerd Room with me today as we talk about his career and life in general and he plays us some kick-ass songs. Enjoy!

Music in this episode:

– No Survivors AND Bootleg by Dance Hall Pimps
(from The Dead Don’t Walk)
DanceHallPimps.com

– Wreckage Of The Future AND I wasn’t Born an angel by RJ Comer
(from Hell Hole Swamp)
www.RJComer.com

– The Moon Ain’t Fallen On Me Yet AND Ex’s And Oh’s by RJ Comer
(from Nightly Suicide)
www.RJComer.com